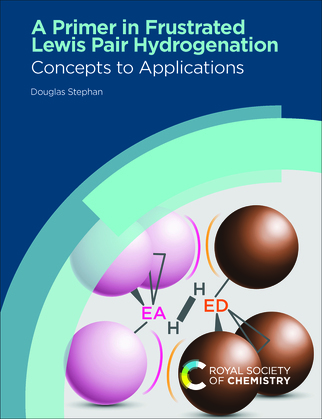 by Douglas Stephan (Author)
Buy for $55.00 Excerpt
Nonfiction Science and technics Science Chemistry Industrial & technical Physical & theoretical
warning_amber
One or more licenses for this book have been acquired by your organisation details

Written for senior undergraduate and graduate students, as well as those chemists unfamiliar with “frustrated Lewis pairs (FLPs)”, this text serves as an introduction to the both the concept and application of FLPs in hydrogenation catalysis.

The book begins by setting the stage as it was around the turn of the century. While the dramatic impacts of catalysis were undeniable, there was dependence of such technologies on transition metal chemistry. Contrastingly, the chemistry of main group elements was dominated by Lewis acid-base behavior. However, these perceptions were altered with the discovery of the ability of “frustrated Lewis pairs (FLPs)” to activate dihydrogen. The basic features, and mechanisms of action of these unique main group systems are chronicled, while the evolution of the initial findings to applications in catalytic hydrogenation is discussed. A subsequent chapter focuses on the breadth of organic substrates for which borane based FLP hydrogenations are effective. This is furthered with a chapter on the metal-free enantioselective reductions. FLP chemistry is not limited to systems involving boranes and this book also catalogues a range of FLP hydrogenation catalysts involving elements from across the periodic table. The final chapter in the book describes other directions of interest where the application of the concept of FLPs hydrogenation are beginning to emerge.

Ideal for course use and self study, this book provides synthetic chemists with a fresh, expert introduction to the field. The reader will be left recognizing that hydrogenation catalysts is a domain no longer limited to transition metals.