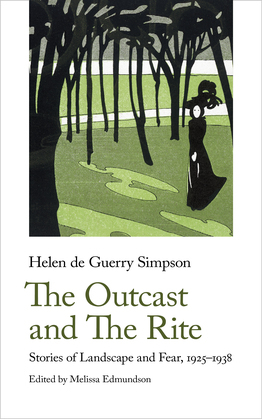 The Outcast and The Rite

Stories of Landscape and Fear, 1925-38
by Helen Simpson (Author), Melissa Edmundson (Editor)
Buy for $9.99 Excerpt
Fiction Occult & supernatural Supernatural creatures Ghost
warning_amber
One or more licenses for this book have been acquired by your organisation details

The Australian novelist and playwright Helen de Guerry Simpson (1897-1940) published many supernatural short stories. This new edition selects the best of her unsettling writing, adding some little-known stories to her 1925 collection The Baseless Fabric (1925). Featured stories include:
• ‘An Experiment of the Dead’, in which a visitor comes to visit a woman in the condemned cell.
• ‘Good Company’, in which a traveller in Italy becomes temporarily possessed of a hitchhiker in her mind.
• ‘Grey Sand and White Sand’ is the horrifying story of a landscape artist who sees and paints a different view.
• ‘The Outcast’, in which a soldier left for dead in the War takes his revenge on his village.
• ‘The Rite’, in which a discontented woman enters a wood, and emerges transformed.
Helen de Guerry Simpson was born in Sydney, New South Wales, and studied at Oxford. Her novel Boomerang won the James Tait Black Memorial Prize for 1932. She died from cancer in 1940. Her close friend, the novelist Margaret Kennedy, took charge of Simpson’s daughter Clemence during the war while Simpson was in her last illness. Clemence and Simpson both feature in Kennedy’s wartime memoir, Where Stands A Winged Sentry, also published by Handheld Press.
The Introduction is by Melissa Edmundson, the leading scholar of women’s Weird fiction and supernatural writing from the early 20th century.