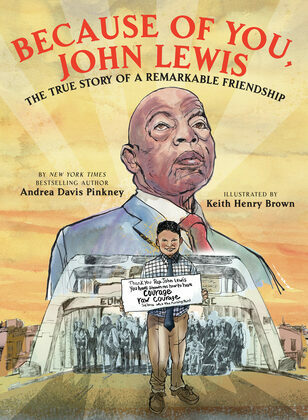 Because of You, John Lewis

When young Tybre Faw discovers John Lewis and his heroic march across the Edmund Pettus Bridge in the fight for voting rights, Tybre is determined to meet him. Tybre's two grandmothers take him on the seven-hour drive to Selma, Alabama, where Lewis invites Tybre to join him in the annual memorial walk across the Bridge. And so begins a most amazing friendship! ​​​​​​​ In rich, poetic language, Andrea Davis Pinkney weaves the true story of a boy with a dream-together with the story of a real-life hero (who himself had a life-altering friendship with Martin Luther King, Jr. when he was young!). Keith Henry Brown's deeply affecting paintings bring this inspiring bond between a young activist and an elder congressman vividly to life. ​​​​​​​ ​​​​​​​Who will be next to rise up and turn the page on history?