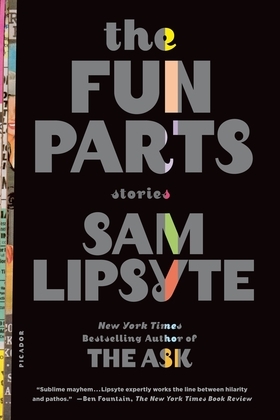 Returning to the form in which he began, Sam Lipsyte, author of the New York Times bestseller The Ask, offers up The Fun Parts, a book of bold, hilarious, and deeply felt fiction. A boy eats his way to self-discovery while another must battle the reality-brandishing monster preying on his fantasy realm. Meanwhile, an aerobics instructor, the daughter of a Holocaust survivor, makes the most shocking leap imaginable to save her soul. These are just a few of the stories, some first published in The New Yorker, The Paris Review, or Playboy, that unfold in Lipsyte's richly imagined world.

Other tales feature a grizzled and possibly deranged male birth doula, a doomsday hustler about to face the multi-universal truth of "the real-ass jumbo," and a tawdry glimpse of the northern New Jersey high school shot-putting circuit, circa 1986. Combining both the tragicomic dazzle of his beloved novels and the compressed vitality of his classic debut collection, The Fun Parts is Lipsyte at his best--an exploration of new voices and vistas from a writer Time magazine has said "everyone should read."