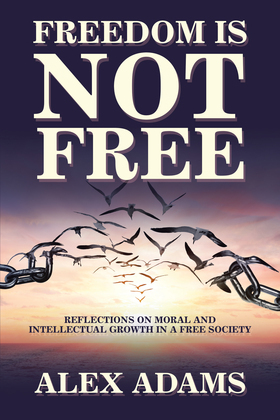 Freedom Is Not Free

by Alex Adams (Author)
Buy for $3.99 Excerpt
Nonfiction Biography & autobiography Political
warning_amber
One or more licenses for this book have been acquired by your organisation details

Liberty and character play vital roles in the functioning of free societies, but we often overlook both.

Alex Adams gives them the attention they deserve in this memoir, highlighting his adventures and missteps in seeking to promote liberty and justice. His insights will particularly resonate with his fellow scientists and engineers, who may recognize themselves in various parts of the story—or see alternate ways to deal with problems.

The author’s intent is to highlight the good, the bad, and the ugly aspects of human behavior to come to conclusions about how we’ve arrived at our current state, where we are likely headed, and how we should think about our lives.

Throughout the book, he promotes the value of freedom even while recognizing that many have difficulty managing it. Even so, he cautions everyone against authoritarian government as it stunts personal growth and inevitably leads to corruption.

Join the author as he shares the lessons he’s learned over a long career and urges everyone to reject party politics in Freedom Is Not Free.