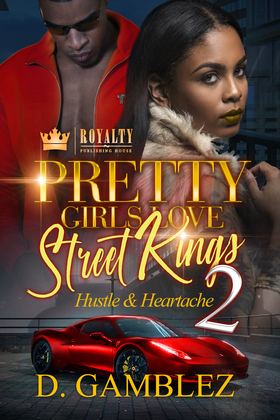 by D. Gamblez (Author)
Buy for $4.99 Excerpt
Fiction Romance Contemporary Christian Contemporary women Romance
warning_amber
One or more licenses for this book have been acquired by your organisation details

DeAndre Harris aka Dre is an 18-year-old black male and the leader of the Tru Aetna Boyz−which includes Raheem, Devonte and Lyrical. Dre and his friends are just ordinary teenagers growing up on the streets of one of the most dangerous neighborhoods in the city of Gary, Indiana: Aetna, a poverty-stricken area where drugs, shootouts, police corruption, gang activity and murder run rampant on a daily basis. The Tru Aetna Boyz are determined to gain money, status, women, and fame in order to achieve the rare lifestyle of ghetto fabulousness. Even if it means selling drugs...or committing murder to do so.

Audriana Escobar aka Audi is an 18-year-old Mexican/Armenian female and the leader of the Gucci Girlz−which includes twins Coco and Makita, and Cherish. Audi and her friends also live in the Aetna area, and their only goal is to find a way out of the poor town and to achieve a life of happiness, love, and luxury, and Audi believes that the first step to her fulfilling that dream is by finishing school and working part-time at the local grocery store.

Naomi Mills, a police sergeant out of the Gary Police Department, is emotionally conflicted when it comes to protecting and cleaning up the streets of G.I. When she and her team of detectives run across a murderous group of masked assailants known only as the Death Dealers and whose sole purpose is to terrorize the streets of G.I., Naomi is determined to bring the killers to justice, but when the Death Dealers suddenly target her and her loved ones, she suspects police corruption in her own department and realizes that the elusive killers may be much closer to her than she’d like, putting her at a crossroads; arrest the masked assailants...or kill them all?

When the Tru Aetna Boyz and the Gucci Girlz cross paths, all of their wants and desires seem to be coming true. But when Sergeant Naomi Mills and team of detectives are thrown into the mix, emotions run high, rivalries explode, loyalties are tested, and distrust is sown.

Will the Tru Aetna Boyz achieve their goal of becoming “ballers” or will they fall to the usual woes that accompany street life? Will the Gucci Girlz’ search for happiness, love and luxury become attainable, or will their dreams turn out to be nothing more than that of a teenage girl’s false hope? And can Sergeant Mills and her team catch the merciless Death Dealers and protect the streets of G.I. from murder and mayhem? Or will all their efforts prove futile and they, too, realize that it’s too late to save a dying city from a lifetime of Hustle & Heartache?