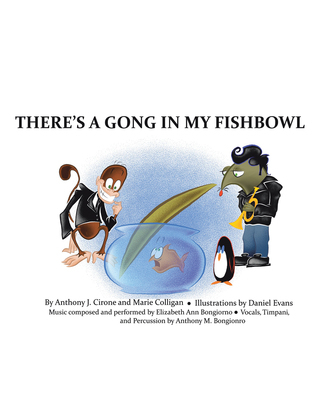 There’s a Gong in My Fishbowl

The book is adorable, highly entertaining and describes how a conductor interacts with the musicians to create a magnificent performance,
The composition called for a Percussionist to dip a vibrating Gong in and out of a tub of water to create a modulation of the Gong sound. The Stage Crew, who had to drag the tub of water on and off the stage next to the Concert Master for every rehearsal and performance were not very happy about this. There idea of “getting even” was to place a goldfish in the tub of water right before the performance. When the Percussionist went on stage just before the performance was to begin and saw the goldfish in the tub, he looked back at the percussion section smiling as he pointed to the tub. We had no idea what he was smiling about. Meanwhile the Stage Crew was having a good laugh as they watched from the wings of the stage. After the performance, the Percussionist told us what happened and explained when the vibrating Gong was placed into the tub the goldfish began to swim rapidly around the tub jumping up and down. By the end of the performance, the goldfish died. But don’t be alarmed, in our story the goldfish does not die.