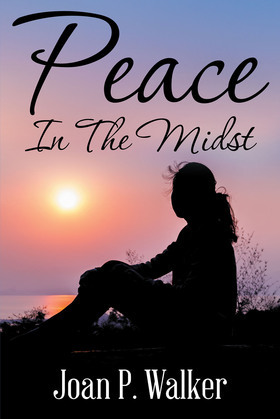 Peace in the Midst

The life of Rachael Webster is suddenly turned upside down, when her mother breaks the news to her that she will be leaving her home in Chicago and going to live with her maternal grandparents in Tennessee. Her grandparents are two devout Christians, but Rachael feels out of place around them.Filled with rage and resentment over the decision her parents have made, Rachael sets out to destroy all her chances for happiness by rebelling against authority.
Rachael admires her grandparent’s faith and has grown to respect their prayer life. She listens to Grandmother as she talks to Jesus about her in the wee hours of the night. She wonders if Jesus really cares about her the way grandma says. God’s conviction weighs heavily upon her mind as she ponders what to do next. Finally in desperation, she goes to the bathroom at the school and calls out to Jesus for her souls Salvation. She laid down her load of guilt and shame and Jesus washed her as white as the snow.
Shortly thereafter, Principal prater sends a note home to her grandparents telling of a school board meeting that has been scheduled to review Rachael’s absentees at the school. The note said that they also wanted to address the subject of Rachael’s negative attitude with the other students. At the meeting, Rachael is told that she must finish the school year at The Bentley School for Wayward Girls. Rachael’s stay at the school is very unpleasant at the start. However God opens so many doors at Bentley as he demonstrates his power and love for all.
Upon graduation, Rachael goes to Africa to fulfill her lifelong dream of becoming a missionary. Her long awaited dream of helping the unfortunates was finally going to be realized, or so she thought. Upon entering the village, however, she had serious doubts. The streets were lined with sick and dying people. It was a death camp, not a mission field, especially for the children and elderly. Burying the dead was a daily matter and weighed heavily upon Rachael.
Finally in desperation she decides to go back to America and ask for help for the Kenyan people. After many failed efforts she decides to go visit her parents before going back to Africa.. Who do you suppose she runs into there. You're right, it was her old boyfriend George Fulton..After hearing about the people of Africa and their state, he quits his Chief of Staff position at the local hospital and goes back to Africa with Rachael.
Many years later after a world of success, they come back home to America and settle in the little town of Townsend, Tennessee. They opened a medical clinic on their property and minister to the needs of the people who live in that area.