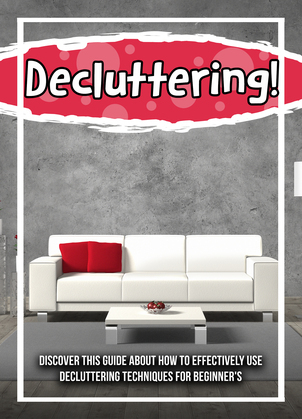 Decluttering! Discover This Guide About How To Effectively Use Decluttering Techniques For Beginner's

by Old Natural Ways (Author)
Buy for $3.99 Excerpt
Nonfiction House & home Cleaning & caretaking Decorating Remodeling & renovation Sustainable living
warning_amber
One or more licenses for this book have been acquired by your organisation details

There's a simple
solution, and it's called decluttering. This method, hard though it might be at
times, could completely change your entire life. It can literally add years to
your life and it can practically transform your living space from one you dread
to one you enjoy being in. Here's how it works.

I'm a big believer of
the fact that getting started is usually the hardest part. The first year or so
of decluttering, especially if you're doing it alone, is when you'll really
need a solid decluttering plan. You'll need a system where you'll be able to
keep track of everything, where you'll be able to sort through things to see
which ones are most important to you and which ones you'd rather get rid of.
You will want to keep a notepad and pen on hand so you can write down reminders
as they come into view. You'll also want a good decluttering calendar (the kind
with all the separate days, months, and seasons on it) to help keep you on
schedule.

Now, most people have
probably heard that decluttering is actually a lot harder than organizing, but
that's not true. There are two distinct differences here. First of all,
decluttering is dealing with the messes and debris and sorting them out
yourself, while organizing requires you to have some organizational skills and
tools as well. Second of all, decluttering involves actually getting rid of the
mess.

For instance, let's say
you're decluttering your home and you really feel like you've done everything,
only to find a box of clothing laying on the floor and then an old rug. You
might easily be tempted to just throw those out because there are so many other
things in the house that should be sorted and placed in a neat pile. However,
that box of clothing and that ragged rug won't actually get disposed of even if
you just threw it out. If you store those items somewhere and never use it
again, then they will just sit there taking up space. Instead, you should go
through your entire house and either donate or sell or even give those items to
someone who actually uses them or maybe even starts their own business selling
them.

When it comes to decluttering,
storage bins are the tools of the trade. If you don't have any storage bins,
then you will have to get creative with other storage methods, like putting
things into boxes. But don't worry; storage bin decluttering tips are easy to
follow. The first thing you need to do is get rid of anything you no longer
use. Even if it's something you haven't used in five years, you should still
put it in the box because it might still be somewhere in your house.