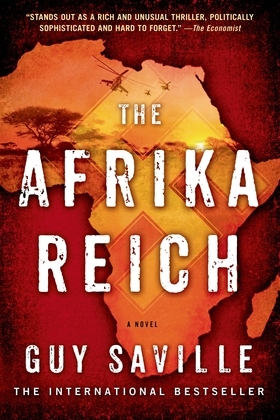 From Guy Saville, the explosive new thriller of a world that so nearly existed

Africa, 1952. More than a decade has passed since Britain's humiliation at Dunkirk brought an end to the war and the beginning of an uneasy peace with Hitler.

The swastika flies from the Sahara to the Indian Ocean. Britain and a victorious Nazi Germany have divided the continent. The SS has crushed the native populations and forced them into labor. Gleaming autobahns bisect the jungle, jet fighters patrol the skies. For almost a decade an uneasy peace has ensued.

Sent to curb his ambitions is Burton Cole: a one-time assassin torn between the woman he loves and settling an old score with Hochburg. If he fails unimaginable horrors will be unleashed on the continent. No one - black or white - will be spared.

But when his mission turns to disaster, Burton must flee for his life.
It is a flight that will take him from the unholy ground of Kongo to SS slave camps to war-torn Angola - and finally a conspiracy that leads to the dark heart of The Afrika Reich itself.