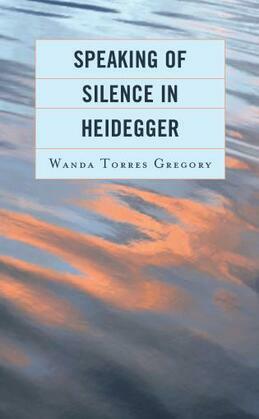 Speaking of Silence in Heidegger

In Speaking of Silence in Heidegger, Wanda Torres Gregory critically analyzes Heidegger’s thoughts on silence. Arguing that silence about silence is a guiding principle in his sparse and often reticent words, Torres Gregory sets out to decipher their elusive meanings. Charting the trajectory of Heidegger’s reflections, from Being and Time to On the Way to Language, she shows that he develops his ideas of silence in increasingly closer relations to his also evolving ideas of truth as the unconcealedness of being/beyng and language as disclosive sonorous saying. Torres Gregory distinguishes between human, primordial, and primeval forms of silence, and the linguistic, pre-linguistic, and proto-linguistic levels at which silence can occur in relation to sonorous speech. While the book focuses on these inner conceptual dynamics, the author remains mindful of Heidegger’s ties to National Socialism and clarifies how his theoretical assumptions allow for oppressive silencing. The book concludes with critical reflections on the later Heidegger’s thinking of silence and proposes alternatives to his claims concerning the sound beyond sounds, the metaphysics of mystical silence, the uniquely linguistic essence of the mortals, and the loud idle talk in the age of modern technology.