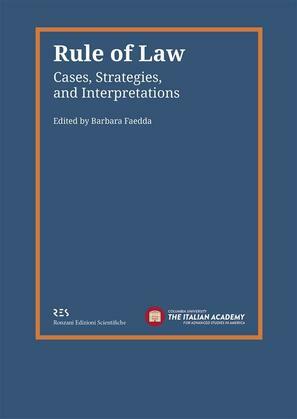 by Barbara Faedda (Author)
Buy for €19.99 Excerpt
Nonfiction Law International
warning_amber
One or more licenses for this book have been acquired by your organisation details

Based on a division of powers and the supremacy of a constitution, the rule of law is not invulnerable, as was demonstrated in the violent attack against the U.S. Capitol on January 6, 2021. It can be used but also abused; it can be respected or exploited, exalted or undermined. It can even arouse skepticism, because it is not always effective against the realities of political life. In a world facing social division, polarization, poverty, climate change, and pandemics, it is crucial to understand the roles of those who manage, control, or are touched by the rule of law. This book’s primary goal is to showcase the variety of perspectives, cases, and methodologies of the people and institutions that bring a range of expertise to bear in many fields. The essays here – which encompass various geographic areas and social groups, as well as several historical periods – address racism, misinformation, human rights, the status of women, the treatment of indigenous peoples, the environment, and more. The rule of law is not merely a set of principles that guarantee a just society. It must be more than a tool in the hands of legal experts; it cannot be a concept out of the reach of ordinary people. It is essential that every citizen feel a clear responsibility to protect and promote the rule of law, to denounce inequalities and oppose imbalances of power, if the common goal is to enjoy freedom, democracy, and justice for all.

Barbara Faedda is the executive director of the Italian Academy for Advanced Studies at Columbia University and adjunct associate professor in Columbia’s Department of Italian, where she teaches courses on contemporary Italy. Among her publications are the books Elite. Cultura italiana e statunitense tra Settecento e Novecento (Ronzani, 2020); From Da Ponte to the Casa Italiana: A Brief History of Italian Studies at Columbia (Columbia University Press, 2017); Present and Future Memory: Holocaust Studies at the Italian Academy, editor (Italian Academy Publications, 2016); and essays including “An Italian Perspective on the U.S.-Italy Relationship” (The White House Historical Association, 2016); “Neurolaw: come le neuroscienze potrebbero cambiare l’antropologia giuridica”; and “We are not racists, but we do not want immigrants.” In 2016 Dr. Faedda conceived the International Observatory for Cultural Heritage (IOCH), dedicated to all issues relating to the survival, protection, and conservation of cultural heritage. In 2019 she was appointed ambassador, permanent observer for the European Public Law Organization to the United Nations.