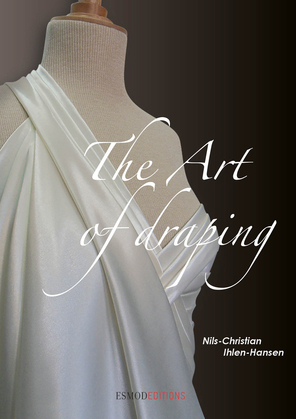 The art of draping

Thanks to Nils-Christian Ihlen-Hansen’s experience as a renowned pattern-drafter, this book tackles the difficult technique of the draped clothing in the Western culture of fashion.

Transparency games and fabrics moving over the body play key roles in this subtle exercise. Draping transforms a garment into a work of art and makes pattern drafting noble through cutting techniques, choices of prestigious fabrics and dexterous manipulations. This exercise in style has always been preferred and used by the top names in fashion.

« Before discovering this piece of work dedicated to the creation of breathtaking draped garments, the author's impressive career path has to be revealed. Hence, I will try to describe this human adventure and this unusual destiny, considering the thirty-year friendship which binds me with the Norwegian fashion designer and pattern-drafter, Nils-Christian Ihlen-Hansen.

It all begins like some Scandinavian tale or Northern Europe legend ""Nils-Christian Ihlen-Hansen's wonderful journey across the world!""

In 1944, in Oslo, Norway, a fragile and different little boy is born ... This human being is as paradoxical as hi country, with its powerful and disturbing nature, where elves, fairies and trolls haunt the fjords and the forests.

Born with a hearing disability, Nils-Christian has to study in a specialized school for the deaf and dumb where he shows an extraordinary will to put his abilities forward, thanks to the support of attentive and comprehensive parents, and to the quality of the public assistance offered to the handicapped in his country.

The sons of the Viking people cannot grow into meaningless persons. Nils-Christian averts the spell casted upon him at his birth by an evil wizard: he recovers 35% of hearing, even though pronouncing consonants remains terribly difficult for him.

How not think of the tragic silence in Edvard Munch's painting ""The Scream""?

He has the chance to be happily endowed with many gifts. The legacy of space-needing, freedom-loving and adventure-seeking conquerors has been completed by his attraction for ballet and modern dance, Opera and music-halls' sceneries, by the discovering of the ""Arts et Métiers"", by his ability to draw and by his developed sensitivity for fabrics and garments. A taste for history, geography, and the passion for other cultures even bring him to study several languages. Thus, the reflexion on his draping method is going to sprout many years afterwards...

Nils-Christian Ihlen-Hansen grows into an eccentric young man. Schoolboys make fun of his original outfits. He dresses his dolls and the trees in the garden; he knits the famous Norwegian sweaters and draws Anita Ekberg and Brigitte Bardot on his notebooks ... What an outsider to his own time! And he sure is good at being happy. He even makes the ""deaf's look"" joyful. He makes it a precious asset to him. He lives in a semi-silent world of concentration and reflexion, where looks are acute, moves precise, and where his long-sighted lucidity allows him to understand human beings as well as the material world. Nils-Christian Ihlen-Hansen is able to ""speak"" with his hands thanks to his skilfulness, until he was able to convey his talent of designer and pattern-drafter with words once he recovered speech, since he knew how to use his inestimable difference with strength.

In 1966, he graduates from Oslo's National School of Arts, from the Drawing, Fashion and Costumes section. He then works as an illustrator with several Norwegian and Danish newspapers.

He is overtaken by the desire to travel... He quickly understands that the Parisian atmosphere encourages the creation by elating the artists' imagination and sensitivity; that the French Art industries convey a fertile universal inspiration at a time when the French Couture by itself satisfies women's seduction desires.

In 1967, as he just graduates from the Parisian School of the Chambre Syndicale de la Couture, Nils-Christian Ilhen-Hansen is hired as ""assistant pattern-drafter for dresses and suits"" for Patou, where he learns about the imperative necessity for a designer to highlight women's curves. ""Nils-Christian Il-hen-Hansen's marvellous journey"" goes on...

His personal achievement leads him to work for Pierre Cardin thanks to his elegant eccentricity. In 1971, he obtains the CET IH Certificate, which asserts of his multiple qualifications in the garment industry. He decides to work as an independent fashion designer, in knitwear for Ted Lapidus, Team-Club, and for other European firms. His preferences for complex cuts, elaborated with a demanding and unhurried perfection take him towards the evening dress, especially for Lebanon and counties of the Middle East. Working in the upscale fur domain, at Leon Vissot, brings him back to his native Norway. As leather reappears in collections with sheepskin for men and women, it leads him to work for Mac-Douglas, Chrome-Cuir, Jean Pecarel or even Zilli. Working in Men's sportswear at Guy Laroche, Pierre d'Alby or Jacques Heim International confirms his soft spot for men's fashion.

At a time when Haute-Couture is shadowed before the growing Ready-to wear, Nils-Christian decides to participate in Luxury Women's Ready-to-Wear collections for suits and coats. At the end of the seventies, he is offered a position to teach fashion design at the ESMOD Paris school. This is where he discovers a new motivation which will guide his life until now. However, the Viking's soul wakes up.

Off he goes for South-East Asian countries, where he participates in numerous projects, by creating theatre costumes, taking part in many fashion juries, and even being offered the distinguished honour of designing outfits for the Royal family of Thailand for the capital's 200th Anniversary. After several years of teaching fashion drawing, shaping and draping in ESMOD's first franchise in Bangkok, he begins to compile the making of his future draping method. He studies temple characters, and the way to work sumptuous fabrics which he associates with the memory of his time at Jean Patou's, where he was overwhelmed by draping and the perfection of exceptional garments created by difficult cutting techniques.

In the meantime, ESMOD International sets up training grounds for talents in France and in the rest of the world. ESMOD Norway? Why not setting up his own fashion design school in Oslo?

He feels ready to fly away for a last migration, this time in the other direction ; towards his native Norway. Nils-Christian Ihlen-Hansen opens MOTESKOLEN-ESMOD Oslo in 1990, which is the first fashion design school in Scandinavian countries. It quickly acquires a first-rank place, especially with the National Norwegian School's consent; Culture and Science departments. In 1995, the recognition of his designer talent leads him to present the wardrobe of Madam the Prime Minister of Norway, Gro Harlem Brundtland, in the press.

He then dedicates his time entirely to his students in Oslo, and to those of the different ""Esmod-International"" schools where he intervenes regularly (in Sao Paulo, Beirut, Dubai, Paris... ). At the same time, he is absorbed in developing his draping methodology which is presented in this piece of work.

For him, Fashion is a product of Art. He has always perceived it like a sculptor and from then on, like an architect. By the teaching of his 'savoir-faire', he conveys his secrets to the young people that he inherited from the elders. As a practitioner who allies the perfect fall of the garment with suggested feminine volumes, either underlined or veiled, he is aware that the balance is dangerous. Nils-Christian is not backward-looking : he only deplores that in today's fashion, there is such a lack of professionalism, and that so few people are aware that this prestigious technique as a profession tends to disappear, or at least is not put forward enough.

In this book, Nils-Christian Ihlen-Hansen introduced his ground-breaking universe through his technique and his personal creation of the six kinds of draping techniques which associate fluidity and graphics, just like the great figures who preceded him. A true invitation to travel can be found, since he reveals that creativity inspired by Art is out of time and space, and that it breaks free from identity, stigmatizing labels and appearances.

Where did this silent, eccentric and fragile young boy who dressed trees, and who seemed doomed to live in silence go?

You would be surprised to see his Viking-like figure, kind of ""Falstaff"" or ""Goldfinger"". This talented character with a magic touch brightly demonstrates by his personal life, which he fully assumes, that handicap is not a fateful coincidence.

In 2008, he won the ""Fashion Awards"" in Oslo, for his impressive career-path. » - Christiane Chalin-Mariotte