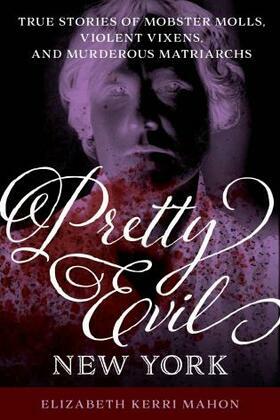 Female criminals are often portrayed as caricatures: Black Widows, Queenpins, Mob Molls, or Femme Fatales. But the real stories are much more fascinating and complex.In Pretty Evil New York author Elizabeth Kerri Mahon takes you on a journey through a rogue’s gallery of some of New York’s most notable female criminals. Drawing on newspaper coverage and other primary sources, this collection of historical true crime stories chronicles eleven women who were media sensations in their day, making headlines across the country decades before radio, television, or social media. Roxalana Druse, the last woman to be hanged in New York; Ruth Snyder, immortalized in James M. Cain’s novella Double Indemnity; serial killer Lizzie Halliday, nicknamed the Worst Woman in the World, who became a Hudson Valley legend; Celia Cooney, the Bobbed Hair Bandit; and Stephanie St. Clair, who rose to the top of the numbers game and then made Harlem cheer when she stood up to mobster Dutch Schultz. Alongside them are some forgotten felons, whose stories, though less well-known, are just as fascinating. Spurred by passion, profit, paranoia, or just plain perverse pleasure, these ladies span one hundred years of murder, mayhem, and madness in the Empire State.