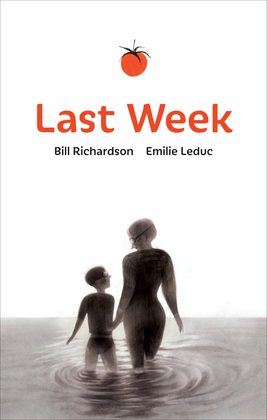 A child cherishes every second of their grandmother's last week of life in this sensitive portrayal of medical assistance in dying (MAiD).

“In this last week, there are seven days.” That's one hundred and sixty-eight hours. Or ten thousand and eighty minutes. Or six hundred four thousand and eight hundred seconds. A child counts every second because this is their grandmother’s last week of life.

As friends and family come to call on Flippa—as Gran is fondly known—the child observes the strange mix of grief, humor, awkwardness, anger and nostalgia that attends these farewell visits. Especially precious are the times they have alone, just the two of them. Flippa, the child sees, has made up her mind. Like time, she is unstoppable. So as Sunday approaches, the child must find a way to come to terms with Flippa’s decision. What is the best way to say goodbye?

Beautifully illustrated in black and white—with one unexpectedly joyful splash of color—Last Week is a nuanced look at what death with dignity can mean to a whole family, with an afterword and additional resources by MAiD expert Dr. Stefanie Green.

Describe how a particular story's or drama's plot unfolds in a series of episodes as well as how the characters respond or change as the plot moves toward a resolution.