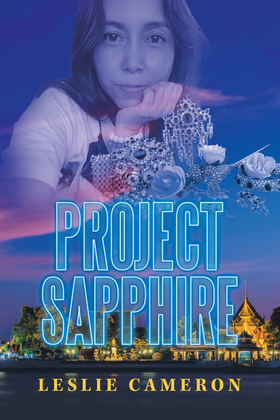 Blame Liesel: it was all her idea… •First, she meets Tom in the Golden Dragon hotel in Nonthaburi.•Second, she lets him take her to his room.•Third, she tells Tom to: “Dream of Jenna dressed in royal blue sapphires.” Oh yes… Jenna! She’s a young Thai girl. She’s Tom’s girlfriend – and she works for a Bangkok jeweller – and this makes her an asset to Project Sapphire. But romance is not the reason for the visit. Tom and Liesel are here to work. They have a contract with Veronique’s company to train the Thailand Border Patrol to use a drone to monitor the heroin traffic that crosses their border with Myanmar. Liesel has an idea: if she’s flying a drone, why not use it to earn a little extra…? She knows Olaf. He’s a Russian engineer who is mining for sapphires, just across the border in Myanmar. Liesel believes that with help from Tom, she and Olaf can help themselves to some of the smaller rough-cut sapphires... and use the drone to make lots and lots of money!It’s a slam-dunk project! Tom flies it in - Olaf loads it up - Tom flies it back - Jenna sells them.What could possibly go wrong…?