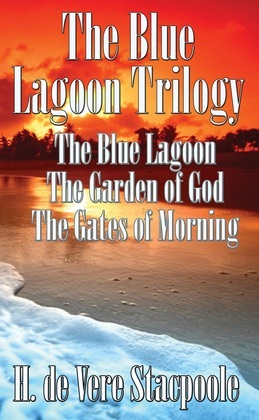 The Blue Lagoon is book one in H. de Vere Stacpoole’s classic romance trilogy. Two young teens, Dick and Emmeline, are stranded on a idyllic, South Pacific island after a shipwreck. The two spend their days swimming, diving for pearls, and exploring their bountiful island. Slowly as they grow they fall into an innocent love. Ignorant of their human sexuality, they do not understand or know how to express their physical attraction to one another. The two conducted their courtship just as the birds conduct their love affairs. Their relationship develops absolutely naturally, blameless and without sin; a marriage according to nature. This classic tale has inspired multiple major motion pictures.
The Garden of God is book two in H. de Vere Stacpoole’s classic best selling romance trilogy. It picks up where The Blue Lagoon ended and follows. Dicky and Emmeline’s child Dick, after he is rescued by his Dicky’s father Aurthur. Aurthur decides to stay on the Island with Dick. Years go by Dick meets a young woman and history repeats itself.
The Gates of Morning is book Three in H. de Vere Stacpoole’s classic best selling romance trilogy. It picks up a day or so after the events of the conclusion of The Garden of God. Dick Lestrange, son of Dicky and Emmeline Lestrange, is about 15. He has come to love Katafa, a Spanish girl who is the adopted daughter of the Kanaka people of the island of Karolin. She brings him to her island, her people declare him their new king. But all is not peaceful on her island and Dick must prepare his new people for war!
Henry De Vere Stacpoole was a best selling Irish author with more than 50 novels to his credit. After a brief career as a ship’s doctor, which took him to numerous exotic locations in the South Pacific Ocean that he later used in his fiction when he became a full-time writer.