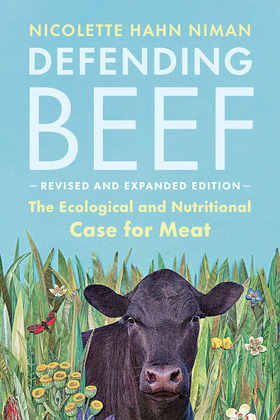 “Nicolette Hahn Niman sets out to debunk just about everything you think you know . . .  She’s not trying to change your mind; she’s trying to save your world.”—Los Angeles Times

As the meat industry—from small-scale ranchers and butchers to sprawling slaughterhouse operators—responds to COVID-19, the climate threat, and the rise of plant-based meats, Defending Beef delivers a passionate argument for responsible meat production and consumption–in an updated and expanded new edition.

For decades it has been nearly universal dogma among environmentalists that many forms of livestock—goats, sheep, and others, but especially cattle—are Public Enemy Number One. They erode soils, pollute air and water, damage riparian areas, and decimate wildlife populations. As recently as 2019, a widely circulated Green New Deal fact sheet even highlighted the problem of “farting cows.”

But is the matter really so clear-cut? Hardly. In Defending Beef, Second Edition, environmental lawyer turned rancher Nicolette Hahn Niman argues that cattle are not inherently bad for the earth. The impact of grazing can be either negative or positive, depending on how livestock are managed. In fact, with proper oversight, livestock can play an essential role in maintaining grassland ecosystems by performing the same functions as the natural herbivores that once roamed and grazed there.

With more public discussions and media being paid to connections between health and diet, food and climate, and climate and farming—especially cattle farming, Defending Beef has never been more timely. And in this newly revised and updated edition, the author also addresses the explosion in popularity of “fake meat” (both highly processed “plant-based foods” and meat grown from cells in a lab, rather than on the hoof).

Defending Beef is simultaneously a book about big issues and the personal journey of the author, who continues to fight for animal welfare and good science. Hahn Niman shows how dispersed, grass-based, smaller-scale farms can and should become the basis of American food production.