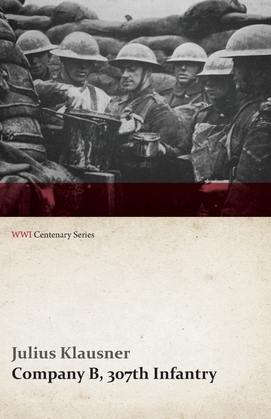 ""I am very glad that Company B-307th Infantry is putting into this form the many memories of the Great War which remain with those of us who participated therein as bright spots in our path through life.
The work done by the 77th Division was most notable and in that work Company B-307th Infantry took full part and contributed its full share. The record of the Company is one of which any organization might well be extremely proud. It took part in the operations in the Vosges; on the line of the Vesle; and in the advance from the Vesle to the Aisne-the 77th Division being the only American division to reach the latter river. In the Argonne-Meuse Offensive which brought the war to a successful conclusion, the Company, with its Regiment, Brigade, and Division, played a noteworthy part. The battle losses incurred by Company B and the battle honors conferred upon members thereof speak for themselves.""
This book is part of the World War One Centenary series; creating, collating and reprinting new and old works of poetry, fiction, autobiography and analysis. The series forms a commemorative tribute to mark the passing of one of the world's bloodiest wars, offering new perspectives on this tragic yet fascinating period of human history. Each publication also includes brand new introductory essays and a timeline to help the reader place the work in its historical context.