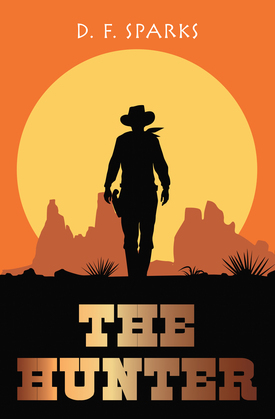 It takes a lot to change a peace loving, God fearing, rancher from a devoted father and husband into a Hunter of men, but sometimes though no fault of his own, this role is forced up on a man who for most of his life has not wished anything bad to happen to anyone.
Jason Macleod was such a man. When he woke up on the morning of March 16, 1871 he had no idea that by the morning of March 17, 1871. His life would completely change and he would become an outlaws deadliest enemy.
If you had broken the law, and especially if innocent bystanders had been killed, you would be the first on the list to answer for your crimes, and you would answer to the business end of a 45.
When a man becomes so filled with hate that he no longer remembers the love that he once felt, then it will take a mighty strong force to bring that love back to him. This will be the destiny of Barbara Willis, a little Spitfire of a woman who stands 5 foot three and approximately 112 pounds soaking wet, but with enough fire in her eyes and determination in her heart to light that fire once again.
Macleod would not be tamed until he brought to justice the men who took that love from him during the act of robbing a bank in the small South Eastern Prairie town of Parsons, Kansas. His wife and daughter had been caught setting at a window in the restaurant and as the bank robbers fled they fired shots in every direction. Two of those shots had left Virginia and Katie Macleod lying face down on a restaurant table with their blood spreading across the floor. As their blood drained from their lifeless bodies so did any kindness and compassion that was in Macleod's heart. Leaving his heart empty of anything but anger and hate and the undying urge to practice a law stated in the Bible, "An eye for an eye, Life for a life."