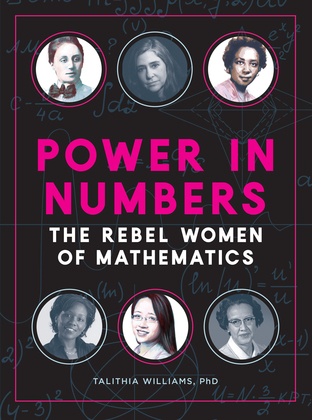 The Rebel Women of Mathematics
by Talithia Williams (Author)
Buy for $28.00 Excerpt
Nonfiction Biography & autobiography Science & technology Women Science and technics Science Mathematics History & philosophy
warning_amber
One or more licenses for this book have been acquired by your organisation details

From rocket scientists to code breakers, discover the incredibly inspiring stories of more than 30 women who fought through the obstacles, shattered the stereotypes, and embraced their STEM passions.

Prepare to be inspired. With more than 200 photos and original interviews with several of the amazing women covered, Power in Numbers: The Rebel Women of Mathematics is a full-color volume that takes aim at the forgotten influence of women on the development of mathematics over the last two millennia.

Each biography reveals the amazing life of a different female mathematician, from her childhood and early influences, to the obstacles she faced and the great achievements she made in spite of them. Learn how:

One thing uniting these women’s stories is that at some point on their journeys, someone believed in them; someone made them think the impossible was perhaps not so impossible.