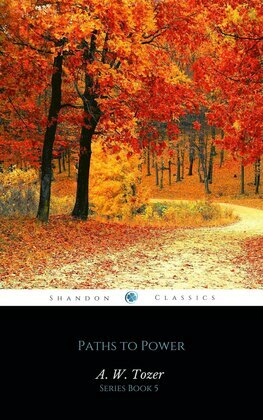 This volume urges Christians to compare their motives and methods with the plumb line of biblical truth. Each major idea may be a ‘Path’ leading to a life of abundant grace promised in the Sacred Word. Paths to Power points Christians and churches to the age-old way of obedience, the only road to revival. Delivering a charge to weak churches, A.W. Tozer calls us to rise up, gather the wood, and ascend the mountain. Tozer affirms, believers may obtain the enabling that comes through the power of the holy spirit. Knowledge of the truth is not enough; the truth must be followed if we would realize in actual experience the blessedness which is here described.

Aiden Wilson Tozer (April 21, 1897 – May 12, 1963) was an American Christian pastor, author, magazine editor, and spiritual mentor. Tozer hailed from a tiny farming community in western La Jose, Pennsylvania. He was converted to Christianity as a teenager in Akron, Ohio: while on his way home from work at a tire company, he overheard a street preacher say, "If you don't know how to be saved ... just call on God, saying, 'Lord, be merciful to me a sinner.'" Upon returning home, he climbed into the attic and heeded the preacher's advice.

In May 1950, Tozer was elected the editor of ‘Alliance Weekly’ magazine (now Alliance Life), a position he filled until his death in 1963. ‘Alliance Life’ is the official publication of the C&MA and is currently a bi-monthly magazine. From his first editorial, titled ‘Quality vs Quantity’ dated June 3, 1950, Tozer wrote, "It will cost something to walk slow in the parade of the ages, while excited men of time rush about confusing motion with progress. But it will pay in the long run and the true Christian is not much interested in anything short of that."

Among the more than 60 books that bear his name, most of which were compiled after his death from sermons he preached and articles he wrote, at least two are regarded as Christian classics: The Pursuit of God and The Knowledge of the Holy. Many of his books impress on the reader the possibility and necessity for a deeper relationship with God. For his accomplishments, he received honorary doctorates from Wheaton and Houghton Colleges.

He spent his last years of ministry at Avenue Road Church in Toronto, Ontario, Canada, where he died from a heart attack. He was buried in Ellet Cemetery, Akron, Ohio, with a simple epitaph marking his grave: ‘A. W. Tozer - A Man of God.’ His last message, The Waning Authority of Christ in the Churches, printed in the Alliance Weekly and dated May 15, 1963, was published 3 days after his death. His biographer James L. Snyder has suggested that, ‘In a sense it was his valedictory, for it expressed the concern of his heart.’ Tozer says here, ‘Among the gospel churches Christ is in fact little more than a beloved symbol... The Lordship of Jesus is not quite forgotten, but it has been mostly relegated to the hymnal where all responsibility toward it may be discharged in a glow of pleasant religious emotion.’