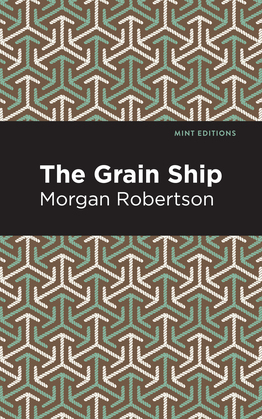 The Grain Ship (1914) is a collection of short stories by Morgan Roberston. Published a year before the author’s death, The Grain Ship compiles works of short fiction originally published in Harper’s Monthly, New Story Magazine, and The Sunday Magazine. The ten stories of The Grain Ship showcase Robertson’s skill for yarn-spinning while benefitting from his experience as a merchant sailor. Dining alone at an upscale restaurant, an old sailor overhears an intriguing conversation at the next table over. He listens as a retired sea captain discusses the discovery off the coast of Spain of a merchant ship abandoned and overrun with rats. Intrigued at first, the sailor soon remembers an encounter nearly three decades old. While making his way across Arizona as a cattle driver, thinking of nothing more than returning to sea, he meets a stranger in distress with a faded anchor tattooed on his arm. Taking him to his shelter, he realizes the stranger has lost his memory, that he has no idea of who or where he is. When a rat runs across the floor of the shelter, he suddenly remembers his experience on a grain ship bound from San Francisco, a disastrous voyage on which the whole crew—save for himself—disappeared. “The Grain Ship” is a tale of terror, illness, and doom on the high seas by an author whose experience as a sailor serves him well. Collected in this volume are nine more stories published during Morgan Robertson’s brief yet productive career as a professional writer, including “From the Darkness and the Depths,” “Noah’s Ark,” and “The Argonauts.” With a beautifully designed cover and professionally typeset manuscript, this edition of Morgan Robertson’s The Grain Ship is a classic work of American fiction reimagined for modern readers.