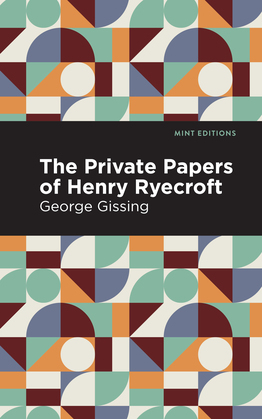 The Private Papers of Henry Ryecroft

by George Gissing (Author)
Buy for $8.99 Excerpt
Fiction Literary Biographical
warning_amber
One or more licenses for this book have been acquired by your organisation details

The Private Papers of Henry Ryecroft (1903) is a semi-autobiographical work by George Gissing. Published in the last year of his life, The Private Papers of Henry Ryecroft is presented as a diary of a friend discovered after the man’s premature death. Divided into four seasons, the diary details the life of a man overwhelmed with depression and regretful of a past mired in unsuccessful work. With a mournful, meditative preface, George Gissing introduces Henry Ryecroft to the world. Uncelebrated in death, unknown in life, Ryecroft was a writer of ambition and talent who struggled for years to overcome the indecency of poverty and the disdain of the critical establishment. At the height of his struggle, nearing fifty years of age, Ryecroft unexpectedly inherits a small fortune, allowing him to retire to a cottage and to live comfortably for the first time in his life. With this newfound sense of calm and financial security, Ryecroft dedicates himself to the leisure of nature walks and to the freedom of diary writing. In these pages, he looks back on a life of toil with a mind molded through misery and curiosity to comment on aspects of the human experience both common and unique. Denied success in life, his voice soars for the patient, attentive reader with whom he shares his triumphs as well as his failures, his secrets and his often surprising, always relatable insights. Through the character of Henry Ryecroft, Gissing finds a way to bare his soul, to look back on his life as one with nothing left to lose and nothing more to gain—in other words, as a man set free. With a beautifully designed cover and professionally typeset manuscript, this edition of George Gissing’s The Private Papers of Henry Ryecroft is a classic work of English literature reimagined for modern readers.