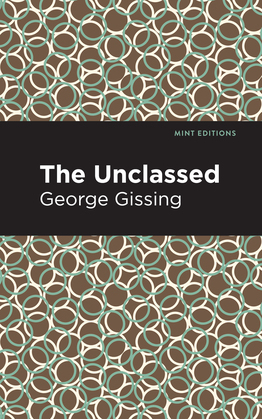 The Unclassed (1884) is a novel by George Gissing. Inspired by his own struggles as a working writer forced to take up odd jobs while failing to gain traction with critics and readers, Gissing crafts a tale of talent, ambition, and romance fallen victim to the vicissitudes of class. The Unclassed poses important questions about convention in Victorian England while proving surprisingly relevant for our own times. Struggling to make it as a lower-class Londoner, Osmond Waymark finds himself unable to give up his literary ambitions. Desperate and lonely, he strikes up a friendship with Julian Casti, a similarly down-and-out young writer who suffers from both poverty and xenophobia as the son of Italian immigrants. When Julian agrees to an ill-advised marriage to Harriet Smales, a rude young woman, he inadvertently exposes Osmond to her manipulative and vindictive ways. As Osmond falls for Ida Starr, a prostitute?s daughter driven to rise above her circumstances, he unwittingly angers Harriet, whose friend Maud is secretly in love with him. In a shocking turn of events, Harriet conspires to get Ida arrested for theft, then maneuvers to get Osmond into the arms of Maud. The two become engaged, leaving Ida?the novel?s heroine?to rely on her wits and survival instinct to not only prove her innocence, but win back the man she loves. In The Unclassed, Gissing explores the limits of social mobility, the struggles faced by young writers, and the power of jealousy to poison both promise and hope. With a beautifully designed cover and professionally typeset manuscript, this edition of George Gissing?s The Unclassed is a classic work of English literature reimagined for modern readers.