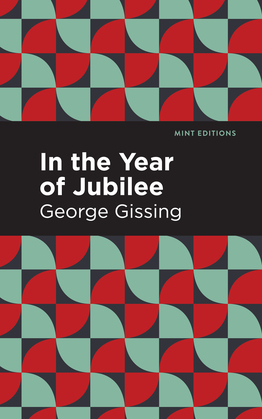 In the Year of Jubilee

In the Year of Jubilee (1894) is a novel by George Gissing. Inspired by his own struggles as a working writer and unhappily married man, Gissing crafts a tale of romance and ambition that measures the dreams of one woman against the realities of an unjust society. In the Year of Jubilee poses important questions about convention in Victorian England while proving surprisingly relevant for our own times. Nancy Lord is a young, well-educated woman raised by a single father following the death of her mother. After completing her schooling, Nancy looks forward to a life of independence and success, but struggles with an inability to focus her ambition. In a moment of uncertainty, she allows herself to be wooed by Lionel Tarrant, a handsome and charming young man who promises her love and security. The two are soon married, but when Nancy becomes pregnant her husband decides to leave for the Bahamas, swearing he must do so in order to provide for his wife and child. Alone and heartbroken, Nancy steels herself, lowers her aspirations, and finds work as a dressmaker at a shop owned by Beatrice, the sibling of her sister-in-law Fanny. Meanwhile, her brother Horace wallows in an unhappy marriage while failing as a businessman and disappointing his elderly father. When Lionel returns, he gains his way back into Nancy’s life through pity, relying on her to provide for the family while controlling and limiting her life. In the Year of Jubilee explores the inequities of class and gender in Victorian England while suggesting that the struggle for happiness is often what drives us to misery. With a beautifully designed cover and professionally typeset manuscript, this edition of George Gissing’s In the Year of Jubilee is a classic work of English literature reimagined for modern readers.