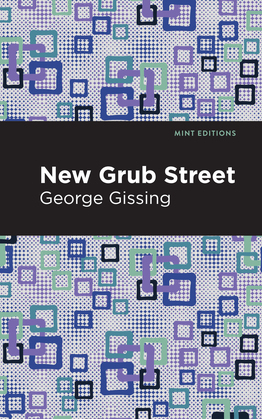 New Grub Street (1891) is a novel by George Gissing. Inspired by his own struggles as a working writer and unhappily married man, Gissing crafts a tale of talent, ambition, and the strain placed on romance by financial need. New Grub Street poses important questions about convention in Victorian England while proving surprisingly relevant for our own times. In 18th century London, Grub Street was where the desperate writer went once their dreams of literary achievement had finally faded under the harsh light of failure. A century later, Grub Street is no more, but the demand for hack writers able to quickly churn out novels, stories, and articles has only increased. Against the odds, two men forge a friendship grounded in struggle. Edwin Reardon is a talented novelist who refuses to sacrifice his literary standards to appease the opinions of professional critics. Jasper Milvain is a jaded journalist who sees writing as a means of gaining greater economic and social mobility. Forced to attempt a popular novel, Reardon fails miserably, and exacerbates his already tense marriage to the point of divorce. Unwilling to mortgage his future for ideals, Milvain gains employment with a popular newspaper while inadvertently risking his relationship with Marian Yule, the sister of Edwin?s ex-wife. As fortunes rise and fall, literature and love give way to the pressures of life, leaving Gissing?s characters to face reality or flounder in willful ignorance. With a beautifully designed cover and professionally typeset manuscript, this edition of George Gissing?s New Grub Street is a classic work of English literature reimagined for modern readers.