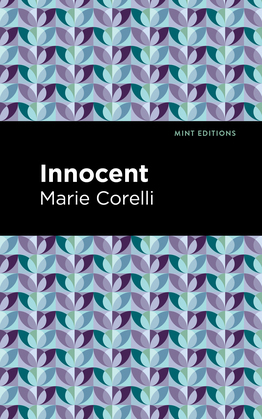 Innocent (1914) is a novel by Marie Corelli. Published at the height of Corelli?s career as one of the most successful writers of her generation, the novel combines fantasy and romance to tell a story of self-discovery, ambition, and the ideals of the early feminist movement. Due for reassessment by a modern audience, Innocent is a must read for fans of Victorian literature. Abandoned as a baby, Innocent is raised by Hugo Jocelyn on the ancestral farm of Sieur Amadis, a legendary French knight. Growing up in this idyllic setting, Innocent develops a love for medieval literature while constructing elaborate fantasies about her mysterious origins. When Jocelyn dies, he reveals the identity of her parents: Lady Blythe, a noblewoman; and Pierce Armitage, an artist. Forced to face reality for the first time in her life, Innocent makes her way to London, where she begins a promising career as a professional writer. Despite her early success, Innocent encounters a friend of her parents who, unbeknownst to her, reveals her whereabouts and sets the stage for their reconciliation. While Armitage, now in Italy, prepares to rekindle their relationship, Innocent falls for a vain, manipulative young man who promises her marriage while harboring his own secret motives. Innocent is a tale of a young woman true to her name, a talented and promising young artist who must learn fast in order to avoid disaster. With a beautifully designed cover and professionally typeset manuscript, this edition of Marie Corelli?s Innocent is a classic work of English literature reimagined for modern readers.