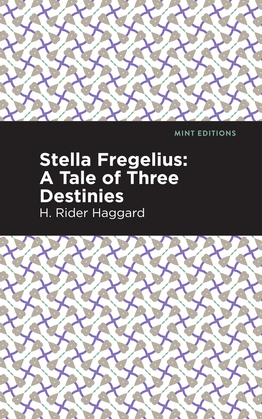 Originally published in 1904, Stella Fregelius: A Tale of Three Destinies centers an unconventional love triangle between a man, his cousin and an unexpected beauty. It?s a complex drama that explores the power of love in the most unusual circumstance. Morris Monk is a young inventor who is engaged to his first cousin, Mary. Even though she is supportive and caring, Morris?s heart belongs to another. He falls in love with Stella Fregelius, the beautiful young daughter of the new church rector. Despite his commitment to Mary, Morris is drawn to Stella with the two establishing an unwavering spiritual connection. When tragedy strikes, his personal and professional relationships are traumatized forcing him to reckon with his past choices. Stella Fregelius: A Tale of Three Destinies is a captivating tale of forbidden romance infused with science fiction and the supernatural. H. Rider Haggard delivers a thrilling story led by a conflicted and often tortured protagonist. With an eye-catching new cover, and professionally typeset manuscript, this edition of Stella Fregelius: A Tale of Three Destinies is both modern and readable.