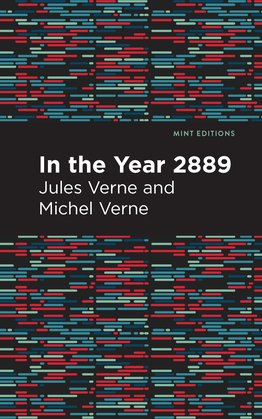 by Jules Verne (Author)
Buy for $4.99 Excerpt
Fiction Science fiction Literary Short stories
warning_amber
One or more licenses for this book have been acquired by your organisation details

From an author with countless beloved science fiction classics, In the Year 2889 is a short work of science fiction that imagines the future. Set in the year 2889, George Washington Smith is a wealthy and ambitious businessman. He possesses a great amount of influence on his society, not just because of his wealth, but because he owns a newspaper. In the Year 2889 depicts a slice-of-life narrative, following George through his day-to-day life as he attempts to change the way news is reported. On the verge of a scientific breakthrough, George sets a goal to make the newspaper more accessible to all, challenging tradition.

First published in 1889, In the Year 2889 by Jules and Michel Verne makes impressive and imaginative predictions for the future, including video conferences, home delivery of meals, flying cars, advertisement projected on clouds, and an average life expectancy of sixty-eight years. Though some of these inventions seem absurd, most are quite familiar to modern day readers. While In the Year 2889 sought to imagine a life a thousand years into the future, most of its predictions were realized just over one hundred years later. Though it no longer applies to the future of a contemporary audience, In the Year 2889 provides valuable insight on the ideas and attitudes of the late 19th century. While the Verne’s made ambitious technological predictions for their time, In the Year 2889 does not imagine drastic socio-political changes. Modern readers can appreciate the originality of Jules and Michel Verne’s predictions for the future while learning about the culture of their present.