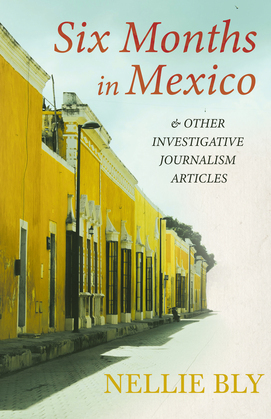 Six Months in Mexico - and Other Investigative Journalism Articles

Elizabeth Cochrane Seaman (1864?1922), also known as Nellie Bly, was an American industrialist, journalist, charity worker, and inventor famous for her 72-day trip around the world in the footsteps of the fictional Phileas Fogg. She is also remembered for her exposé working undercover in a mental institute, which led to a new style of investigative journalism. In her 1888 travelogue, Seaman recounts her time spent travelling around Mexico, offering insights into all aspects of Mexican life from manners and methods of courtship to politics, history, geography, and beyond. Contents include: ?Adieu to the United States?, ?El Paso Del Norte?, ?Along the Route?, ?The City of Mexico?, ?In the Streets of Mexico?, ?How Sunday is Celebrated?, ?A Horseback Ride Over Historic Grounds?, ?A Mexican Bull-Fight?, ?The Museum and its Curiosities?, etc. Read & Co. Travel is republishing this classic travelogue now in a new edition complete with an introductory biography by Frances E. Willard and Mary A. Livermore.