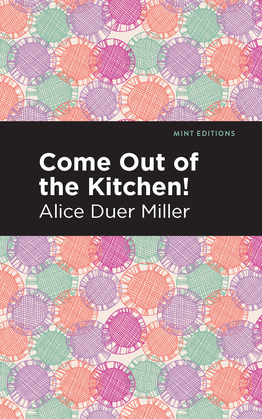 Come Out of the Kitchen

Come Out of the Kitchen (1916) is a novel by Alice Duer Miller. Inspired by her work as an activist for women’s rights, Miller presents a romantic comedy exploring the effects of class and gender on love, friendship, and work. Adapted for theater and film, Come Out of the Kitchen is a charming novel from a writer whose reputation as a popular poet should extend to her fiction as well. Arriving in the South, Mr. Burton, a successful young businessman, meets with a local real estate agent to inquire about renting a property for the summer. Interested in an old mansion, he is eager to sign the contract—only one strange detail prompts his hesitation. If he would like to stay there, he will need to employ the four domestic servants already living at the property. Desperate to settle down, Burton agrees to meet with them first: the butler, a kind and intelligent man; the cook, a beautiful woman; the housemaid, a sullen young lady; and a young boy whose job is to do everything else. Slightly unsettled by their manners and accents, Burton agrees to keep them on and soon makes his way to the mansion, where he immediately plans to host a small party of friends. When the day of the party arrives, however, the behavior of the servants begins to change. Come Out of the Kitchen is an entertaining romantic comedy from Alice Duer Miller, whose political work as a women’s rights activist informs her characters and their frequently humorous interactions. With a beautifully designed cover and professionally typeset manuscript, this edition of Alice Duer Miller’s Come Out of the Kitchen is a classic of American literature reimagined for modern readers.