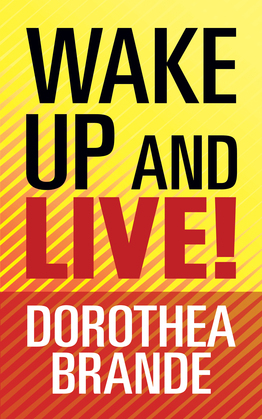 Wake Up and Live!

by Dorothea Brande (Author)
Buy for $3.98 Excerpt
Nonfiction Esotericism, occult
warning_amber
One or more licenses for this book have been acquired by your organisation details

Born in Chicago, Dorothea Brande (1893-1948) was a widely respected journalist, lecturer, editor, fiction writer and writing instructor. Brande is widely known for her enduring guide to the creative process, Becoming a Writer, originally published in 1934 and still popular today. In 1936, Brande published an inspirational masterwork of practical psychology, Wake Up and Live! which she wrote during the Great Depression.

Wake Up and Live! opened the eyes of thousands of people to a whole new idea of living, as it taught them how to concentrate on the things that really matter. Her most successful book, with more than 34 printings and over 1 million copies sold, it was an inspiration and lesson to all that success is within reach of everyone.

For many years, Wake Up and Live!, with its simple and sound advice for personal excellence, rivaled the popularity of popular works such as Think and Grow Rich and How to Win Friends and Influence People. It is considered one of the greatest success guides ever written. Now, this beautifully designed classic of self-improvement, can help you revolutionize your existence and lead you to find the success you desire and so rightly deserve. In this remarkable work you will learn: