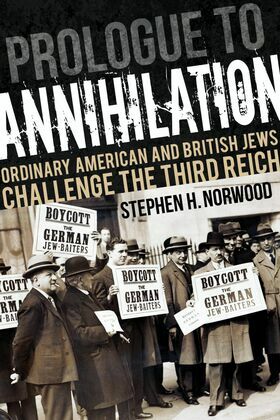 by Stephen H. Norwood (Author)
Buy for $39.99 Excerpt
Nonfiction History Holocaust 1945-1989
warning_amber
One or more licenses for this book have been acquired by your organisation details

American and British appeasement of Nazism during the early years of the Third Reich went far beyond territorial concessions. In Prologue to Annihilation: Ordinary American and British Jews Challenge the Third Reich, Stephen H. Norwood examines the numerous ways that the two nations' official position of tacit acceptance of Jewish persecution enabled the policies that ultimately led to the Final Solution and how Nazi annihilationist intentions were clearly discernible even during the earliest years of Hitler's rule.

Further, Norwood looks at the nature and impact of American and British Jewish resistance to Nazi persecution and the efforts of Jews at the grassroots level to press Jewish organizations to respond more forcefully to the Nazi menace. He examines the worldwide protest and boycott movements against Germany and German goods as well as mass demonstrations by working-class and lower-middle-class Jews in many American and British cities.

Prologue to Annihilation details how the events of 1930-1936 tested American and British societies' willingness to accept Nazism and its anti-Jewish philosophy and illuminates the divisions that existed even within the Jewish community about how best to challenge Nazi antisemitic policies and atrocities.