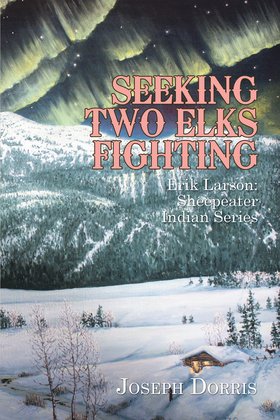 Raised by the Sheepeater Indians of the Salmon River country. Erik Larson fulfills part of his boyhood vision and becomes Two Elks Fighting. After finding his sister, Katrine, and the other Swedes, he realizes that he no longer belongs in their world or in the Sheepeaters' world, and he leaves the valley. A second vision reveals evil and confuses Erik, but Erik's spirit helper tells him it was not meant for him, and he falls in love and marries Bright Shell, a Lemhi Shoshoni woman. Erik believes he has found peace by living between the two worlds as a trapper with his wife in the Lost River Range until evil strikes.

This engaging novel chronicles the history of the Clearwater and Salmon River areas of Central Idaho, the Lemhi Shoshoni, the gold strikes, the Chinese merchants, and the packers who supply the camps. A constant threat are the road agents who prey on unsuspecting parties like Erik. Dorris weaves numerous historical events into the fictional lives of Erik and the Swedish settlers in Long Valley.