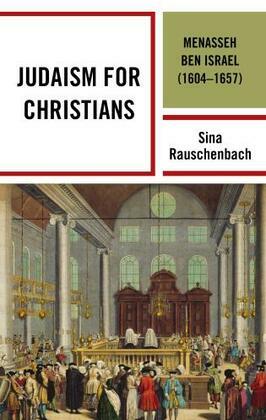 Menasseh ben Israel (1604–1657) was one of the best-known rabbis in early modern Europe. In the course of his life he became an important Jewish interlocutor for Christian scholars interested in Hebrew studies and negotiated with Oliver Cromwell and Parliament the return of the Jews to England. Born to a family of former conversos, Menasseh was versed in Christian theology and astutely used this knowledge to adapt the content and tone of his publications to the interests and needs of his Christian readers. Judaism for Christians: Menasseh ben Israel (1604–1657) is the first extensive study to systematically focus on key titles in Menasseh’s Latin works and discuss the success and failure of his strategies of translation in the larger context of early modern Christian Hebraism. Rauschenbach also examines the mistranslation of his books by Christian scholars, who were not yet ready to share Menasseh’s vision of an Abrahamic theology and of a republic of letters whose members were not divided by denomination. Ultimately, Menasseh’s plans to use Jewish knowledge as an entrée billet for Jews into Christian societies proved to be illusory, as Christian readers understood him instead as a Jewish witness for “Christian truths.” Menasseh’s Jewish coreligionists disapproved of what they perceived to be his dangerous involvement in Christian debates, providing non-Jews with delicate information. It was only a century after his death that Menasseh became a model for new generations of Jewish scholars.