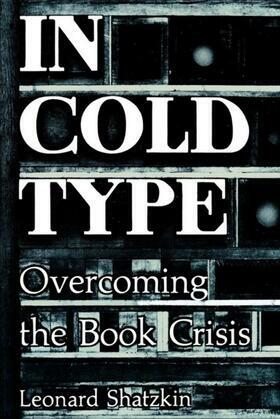 During the nineteen seventies and early eighties, the trade book publishing industry faced financial and philosophical problems of a magnitude unparalleled in its existence. It appeared that without undertaking urgent and far-reaching reforms, the profits of publishing houses would decline to a level that would make the survival of many established firms extremely doubtful. The expansion of the major bookselling chains, coupled with antiquated distribution and marketing methods, would cause many indie bookstores to close. Authors of talent, vision, and intellect would find it harder to be published than ever before. Readers would grow more jaded by a glut of formula books, or more frustrated finding that special title to suit their needs. Leonard Shatzkin's "In Cold Type" explores the reasons behind the publishing crisis of that time. Neither an essay about the perils of the best-seller list syndrome nor a bland sociological study, "In Cold Type" is a sharp critique of exactly what was wrong with the nuts and bolts of publishing and the ingrained attitudes that resisted change and reform. Backed by more than thirty-five years of experience in executive positions at major houses, Leonard Shatzkin describes publishing's nineteenth-century methods of distribution, the marginal profitability of booksellers, unnecessary evils of remaindering, waste in book production, decline of the editorial function to a clerkship, collapse of the paperback book publishers, what authors need to know about their publishers' "skills," and why the common complaint "We publish too many books!" is not true. Shatzkin not only saw what was, he also what could be, and offered new solutions that helped the book industry overcome its malaise. His solutions were immediate, practical, and necessary, and many of his insights, particularly about inventory management and standardization ultimately revitalized the publishing industry.