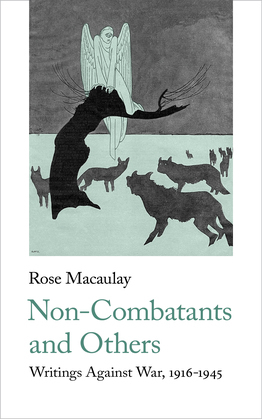 Non-Combatants and Others (1916) is a classic of pacifist writing and was one of the first novels to be written and published in Britain during World War I that set out the moral and ideological arguments against war. Scathing and heart-breaking, it finds a way for pacifists to work for an end to conflict.

Also included is some of Macaulay’s journalism for The Spectator, Time & Tide, The Listener and other magazines from the mid-1930s to the end of World War II, detailing the rise of fascism and the civilian response to the impending war. Witty, furious and despairing in turn, these forgotten magazine columns reveal new insights into how people find war and its tyrannies creeping up on them. These are supported by Macaulay’s two inter-war essays on pacifism and a short story narrating a devastating account of the loss of her flat and all her possessions in the Blitz.

The Introduction is by Jessica Gildersleeve of the University of Southern Queensland.