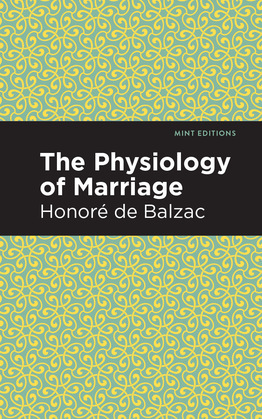 The Physiology of Marriage

The Physiology of Marriage (1829) is a book length essay by French writer Honoré de Balzac. Written from the point of view of an author who has overheard scandalous conversations between two women, The Physiology of Marriage is both a critique of the institution of marriage and a satirical attempt to scientifically explain the cause and frequency of marital infidelity. The essay was an early success for Balzac, gaining him a reputation as a talented writer and creative critic of contemporary French society.

The essay consists of a series of meditations that approach marriage through a variety of scientific, philosophical, and anecdotal methods. Arguing that marriage is an institution that runs counter to human nature, the author uses questionable mathematics to calculate the number of married women in France who are likely to seek out affairs in order to feel a passion denied to them. Describing the likely signs of marital infidelity—standoffishness, a change in dress, lack of romance—he claims that French men have grown far too accepting of their wives’ affairs. Rather than reject the institution altogether—he sees it as integral to upholding the social order—the author suggests that young women be allowed a certain amount of freedom to explore their romantic inclinations and to prepare themselves for the banality of married life. The Physiology of Marriage finds satire in treating seriously and scientifically the often hidden and always complex matters of the heart, as well as through its suggestion that women, not men, are to blame for the proliferation of infidelity in France.

With a beautifully designed cover and professionally typeset manuscript, this edition of Honoré de Balzac’s The Physiology of Marriage is a classic of French literature reimagined for modern readers.