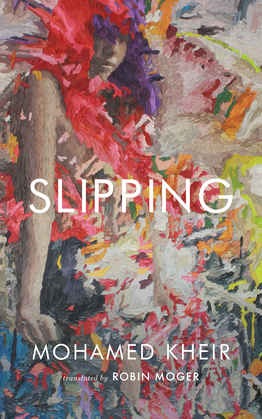 Under mysterious circumstances, Seif, a struggling journalist, is introduced to a source for a new story: a former exile with an encyclopedic knowledge of the country’s obscure, magical spaces. Together—as tourist and guide—they step into a world hidden in plain sight. In Alexandria, they wait as trains bear down on them at the intersection of several busy lines; they follow a set of stairs down to the edge of the Nile and cross the water on foot; and down south, they sit before a bare cave wall, a cinema of private visions. What begins as a fantastical excursion through a fractured nation quickly winds its way inward, as Seif begins to piece together the mysteries of his own past, including what happened to Alya, his girlfriend with the gift of "singing sounds." Seif alone confronts the interconnectedness of his own traumas with Egypt's following the Arab Spring and its hallucinatory days of revolutionary potential.

Musical and parabolic, Slipping seeks nothing less than to accept the world in all its mystery. An innovative novel that searches for meaning within the haze of trauma, it generously portrays the overlooked miracles of everyday life, and attempts to reconcile past failures—both personal and societal—with a daunting future. Delicately translated from Arabic by Robin Moger, this is a profound introduction to the imagination of Mohamed Kheir, one of the most exciting writers working in Egypt today.