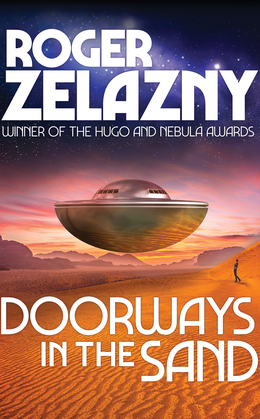 Doorways in the Sand

by Roger Zelazny (Author)
Buy for $6.99 Excerpt
Fiction Fantasy Contemporary & supernatural fantasy Action & adventure Science fiction Adventure
warning_amber
One or more licenses for this book have been acquired by your organisation details

Can You Hear Me Fred?


Fred Cassidy leads an idyllic life. As long as he remains a full time college student without a degree, he is provided a very generous stipend from his uncle?s estate.

But after thirteen years of happy undergrad existence everything is about to change.


Cassidy?s home is broken into and ransacked. When he enters he is assaulted by a former professor wanting to know where the alien artifact known as the star stone is. Cassidy manages to escape, only to discover that he is also being pursued by hired criminals, Anglophile zealots, government agents, and aliens.


Cassidy has no idea where the star stone is but he realizes that unless he finds it, one of these factions will eventually catch up to him and most likely kill him.


Doorways in the Sand is fast paced, humorous, and has the most lyrical prose of any of Zelazny?s novels. It?s simply a joy to read, and was nominated for both a Hugo and Nebula Award for best novel.