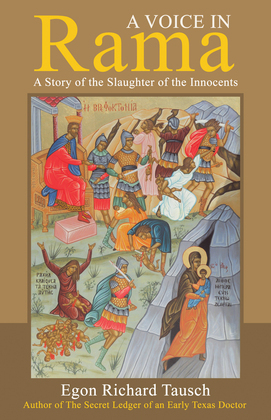 A Voice in Rama

A Voice In Rama transports the reader into the brutality, tragedies and triumphs in the life of Jerusha, starting as a young widow of Bethlehem. It is a suspense-revenge story, experienced entirely through Jerusha?s eyes, ears and mind, though she is illiterate and speaks only Aramaic in a multilingual world.

In a scene of absolute horror, Jerusha suffers through the slaughter of her three young sons during King Herod?s massacre of the Innocents. Jerusha shares the guilt, having secretly sacrificed her nephews and their mother in a doomed attempt to save her own children. Alone with her grief, Jerusha loses her Jewish faith and ethics. She claws her way up from beggary to wealth as a shady business-woman, to fulfill her plan of vengeance. Operating about Jerusalem, she joins the anti-Roman Zealots, to acquire the skills of an assassin, for which Jerusha finds she has a talent and passion. Among others, she kills Herod?s old officer of years before. Her ultimate target, however, is the ?False Messiah? who had provoked the King?s order.

Patiently, the aging Jerusha stalks Jesus among his followers, her dagger up her sleeve...