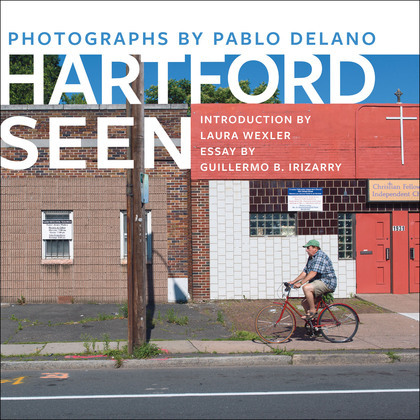 Hartford Seen is the first modern-day art photography book focused exclusively on Connecticut's capital city. Born and raised in Puerto Rico, Pablo Delano relocated from Manhattan to Hartford in 1996 to teach photography at Trinity College. On his daily drive to work, he was struck continually by the city's visual beauty and complexity. He left the car and began to explore, using his camera as a means of gaining a deeper understanding of what he found.

In this personal meditation on Harford's built environment, Delano implements a methodical but intuitive approach, scrutinizing the layers of history embedded in the city's fabric. He documents commercial establishments, industrial sites, places of worship, and homes with a painter's eye to color and composition. His vision tends to eschew the city's better-known landmarks in favor of vernacular structures that reflect the tastes and needs of the city's diverse population at the dawn of the 21st Century.

Over the last 100 years Hartford may have transformed from one of America's wealthiest cities to one of its poorest, but as suggested by Hartford Seen, today it nevertheless enjoys extraordinary cultural offerings, small entrepreneurship, and a vibrant spiritual life. The city's historical palette consists mostly of the brownstone, redbrick, and gray granite shades common in New England's older cities. Yet Delano perceives that it is also saturated with the blazing hues favored by many of its newer citizens. With more than 150 full-color images, Hartford Seen vitally expands the repertoire of photographic studies of American cities and of their contemporary built environments.

Hartford Seen is the first modern-day art photography book to focus on Connecticut's capital. Comprising more than 150 full-color images, it has been in the making for two decades. In this personal meditation on the city's built environment, he implements a methodical but intuitive approach, using color and meticulous compositions to evoke the city's essence, particularly the way global population flows impact the city's physical structures. Hartford Seen is meant to be taken as a whole, as a visual document that can shed light on the unique characteristics of one city's past, present, and potential futures.