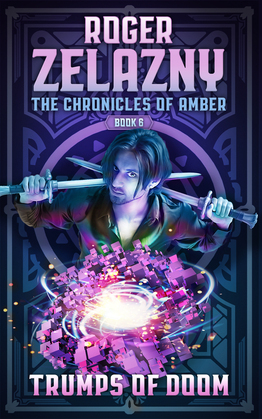 by Roger Zelazny (Author)
Buy for $6.99 Excerpt
Fiction Fantasy Epic Contemporary & supernatural fantasy Historical Science fiction Adventure
warning_amber
One or more licenses for this book have been acquired by your organisation details

Welcome back to Amber, the one true world of which all others are but shadows and reflections. The Chronicles of Amber is an deeply influential fantasy series beloved by millions of readers.


Trumps of Doom is book 6 of the Amber series and first narrated by Merlin, son of Corwin.


Merlin knows that someone is going to try and kill him. He knows this because it’s April 30th and someone tries to kill him every April 30th. He has no idea who wants to kill him, why they want to kill him, or why they only try to kill him once a year. But this year he intends to find out and put a stop to it.


Little does Merlin know that he is about to launch himself into an adventure full of danger, intrigue, royal politics, magic, and deceit that will take him across the multiverse and back. There is far more afoot that Merlin can imagine . . . and thus continues one of the greatest series ever written.


This Kindle edition restores the prologue that, until now, ran only in a special limited edition. A must for all Zelazny fans!


Roger Zelazny was a science fiction and fantasy writer, a six-time Hugo Award winner, and a three-time Nebula Award winner. He published more than 40 novels in his lifetime. His first novel This Immortal, serialized in The Magazine of Fantasy and Science Fiction under the title ...And Call Me Conrad, won the Hugo Award for Best Novel. Lord of Light, his third novel, also won the Hugo award and was nominated for the Nebula award. He died at age 58 of cancer. Zelazny was posthumously inducted into the Science Fiction Hall of Fame in 2010.