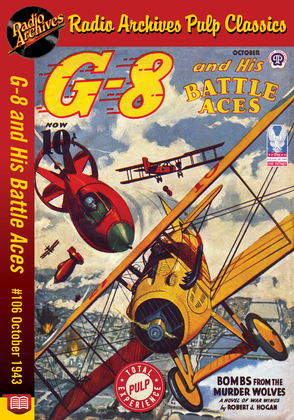 by Robert J. Hogan (Author)
Buy for $4.99 Excerpt
Fiction Action & adventure Science fiction Military Adventure
warning_amber
One or more licenses for this book have been acquired by your organisation details

And trapped in the vaults of Europe?s most feared Murder Master, the Ace American Flying Spy makes his last desperate gamble to track down the secret of the deadliest weapon any war has ever known ? bombs which are piloted by living men, who have sworn to destroy a nation! G-8 and his Battle Aces rode the nostalgia boom ten years after World War I ended. These high-flying exploits were tall tales of a World War that might have been, featuring monster bats, German zombies, wolf-men, harpies, Martians, and even tentacled floating monsters. Most of these monstrosities were the work of Germany?s seemingly endless supply of mad scientists, chief of whom was G-8?s recurring Nemesis, Herr Doktor Krueger.