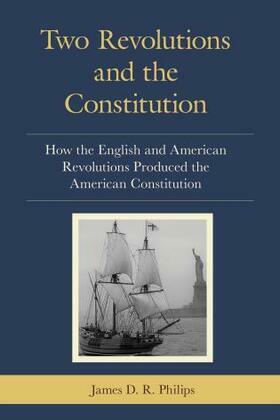 Two Revolutions and the Constitution

by James D. R. Philips (Author)
Buy for $19.00 Excerpt
Nonfiction History Other Revolutionary History by country United States Historical period Colonial period (1600-1775) Revolutionary period (1775-1800)
warning_amber
One or more licenses for this book have been acquired by your organisation details

With our nation divided and our Constitution and rights under daily siege, now is the time to understand the ‘why’ and the ‘how’ of the system of rights and government established by the Constitution. Preventing tyranny was key in creating the new system. No tyrants, no despots: instead, a system of rights, separate powers, checks and balances.Why and how did Americans conceive a republic built on individual liberty, in an era of oppressive monarchies?

The book is concise and to the point. The author tells the story of how the founding charters of the American colonies contained the seeds of American rebellion in the 1760s and 1770s; and of how partial independence as British colonies, the innovations in the first American constitutions (the State constitutions), and the failure of the States’ first attempt to federate, all influenced the Framers in drafting the final Constitution.The book also describes how the American Revolution was shaped by the English revolutions of the 1600s, which led to a new English constitution, under which Parliament and the English people had many powers and rights which superseded the King’s.