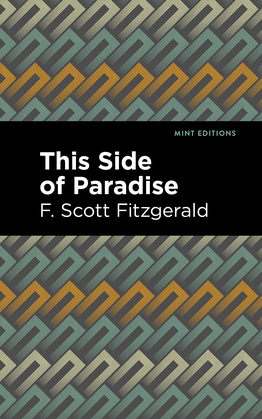 by F. Scott Fitzgerald (Author)
Buy for $9.99 Excerpt
Fiction Classics Historical
warning_amber
One or more licenses for this book have been acquired by your organisation details

This Side of Paradise (1920) is a novel by F. Scott Fitzgerald. Published at the very beginning of Fitzgerald’s career as a leading writer of American fiction, This Side of Paradise was a resounding critical and commercial success, allowing him to marry his young love Zelda Sayre. The novel is a semi-autobiographical study of youthful ambition, disillusioned romance, and a generation scarred by war. Amory Blaine is a young man from the Midwest with great ambitions and unfocused talent. He attends Princeton University, where he excels as a student and writer while keeping up a romantic correspondence with Isabelle Borgé, a girl from his youth. Greatly anticipating her arrival in Princeton, Blaine reunites with her one last time for a university prom, where he realizes whatever love they once shared has now been lost. Despairing, Blaine enlists in the army and is sent overseas to fight in the First World War. When he returns, he takes up a position as a copywriter at a New York City advertising agency, falls for the beautiful debutante Rosalind Connage, a quickly finds himself spiraling into self-doubt and out of control. This Side of Paradise is a tragic story of unrealized potential in a young man willing to meet the world head-on without ever looking at himself. Upon publication, Fitzgerald’s debut marked the beginning of a promising career as one of twentieth century America’s finest writers of fiction. With a beautifully designed cover and professionally typeset manuscript, this new edition of F. Scott Fitzgerald’s This Side of Paradise is a classic work of American literature reimagined for modern readers.