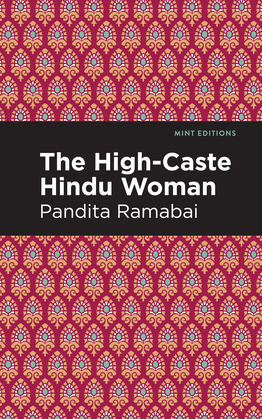 by Pandita Ramabai (Author)
Buy for $5.99 Excerpt
Nonfiction Social science Sociology History History by country Asia India
warning_amber
One or more licenses for this book have been acquired by your organisation details

The High-Caste Hindu Woman (1887) is a work of political nonfiction by Pandita Ramabai. Written for an American audience, The High-Caste Hindu Woman was published in Philadelphia while Ramabai was living in the United States as a lecturer for the Women?s Christian Temperance Union. Born and raised in India, Ramabai converted to Christianity and dedicated her life to advocating on behalf of impoverished women and children. A fiery orator and true iconoclast, Ramabai?s activism led to important educational and social reforms in her native country.

Arguing for the need to offer education to women, Ramabai examines the nature of life for Hindu women born into the Brahman caste in nineteenth century India. Despite their position in Indian society, these women remained subjected to the control of their husbands, who limited their freedom and social mobility. Ramabai examines the traditions and customs of Hinduism in order to show how women are made ignorant by their oppression and taught to accept their conditions, thereby prolonging the suffering of lower caste and impoverished Hindus. Through education alone, Ramabai shows, are women able to alter their oppressed condition. Both a portrait of Indian life and a moving political treatise, The High-Caste Hindu Woman showcases Ramabai?s foresight as an activist and reformer who sought to radically improve the lives of her people.

With a beautifully designed cover and professionally typeset manuscript, this edition of Pandita Ramabai The High-Caste Hindu Woman is a classic work of Indian political nonfiction reimagined for modern readers.