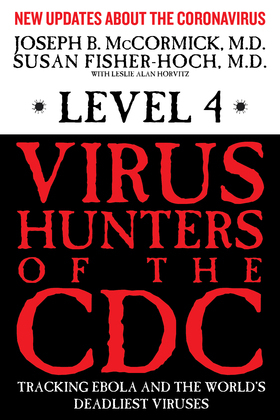 Level 4: Virus Hunters of the CDC

"[McCormick has] been face-to-face with Ebola in Africa.... He... worked for days inside a mud hut that was smeared with Ebola blood, on his knees among people who were crashing and bleeding out." ?Richard Preston, The Hot Zone
Now with a new foreword by the authors about the novel Coronavirus pandemic. Sublimely equipped to survive, to propagate, to conquer, the virus is neither really alive nor really dead. Its dimensions are measured in molecules. It attacks by dismantling its human targets cell by cell.
An ancient adversary, resident on this earth long before our evolutionary ancestors arrived, the virus is without conscience or compassion, without mind. It enjoys the advantages of countless numbers and infinite time. It is a being almost too simple to understand and too basic to outwit.
We are locked in a war with the virus. Each battle kills some of us. The battles have many names: Ebola, Lassa fever, Crimean Congo Hemorrhagic Fever, AIDS . . .
Dr. Joseph McCormick and Dr. Susan Fischer-Hoch have met them all; and they have fought them all. Level 4: Virus Hunters of the CDC is their story.
It is an intense, personal account of more than a quarter of a century on the front lines?in the ultra high-tech "hot zone" lab that McCormick was instrumental in creating at the Centers for Disease Control in Atlanta, as well as in the most primitive places on the planet, where the local climate, terrain, and politics can kill as easily as any disease.
In the villages of Zaire and Sudan, the ghettoes and rain forest of Brazil, and the nomadic settlements of northern Pakistan, the cutting edge of science meets the deadly universe of viral disease. The elite corps of virus hunters who dare to penetrate these realms combine the unquenchable curiosity and raw guts of intrepid explorers with the training of top-level scientists, the hunch-playing passion of master sleuths, and the compassion of truly great physicians.
Told in intimate detail by two of the world's best-known virologists?colleagues, collaborators, husband and wife? Level 4 is a journey across the world and into many strange new worlds: from the seductive beauty of equatorial Africa?a limitless reservoir of infection?to the confines of the all-but-invisible field of the electron microscope. While other books have offered hot zones, sick monkeys, and grim statistics, Level 4 brings home from the world of the virus the human stories of those who lived, and those who died.