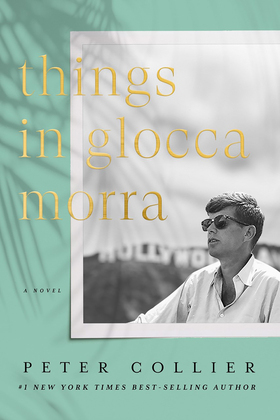 ?What?s the point of being Irish anyway if you don?t think the world will break your heart?? asks Jack Kennedy. He is spellbound by a song about Ireland?s neverland of dreams: ?How Are Things in Glocca Morra??

No one better knew the real JFK?s dreams and passions than Lem Billings, a prep-school roommate who made himself ?sidekick everlasting.? The late Peter Collier had the great fortune to obtain oral histories from Billings himself, and they became the basis for a vivid biographical novel in Lem?s voice. On assignment with the Hearst newspapers, Jack goes with Lem to Hollywood, that neverland of dreams he loves for ?the feeling that something might happen.? Things do. Communists and gangsters vie for control of the unions. There are labor strikes, blackmail, assassinations. And there are glamorous actresses. Joseph Kennedy Sr. hovers oppressively over his son and aims to derail his romance with Valentina, survivor of an Italian prison camp and daughter of a mobster.

The world breaks Jack?s heart, and he dives into politics with steely purpose. But the interlude in Hollywood sends ripples through the Kennedys? lives. When Lem gets the news of JFK?s assassination, he instantly thinks of Val?s father?a man whose middle name is vendetta. Billings never got the answers he sought about Jack?s death. As for his intimate knowledge of the Kennedys, he remained ever discreet, but left a trove of recollections to be opened by a later generation. Conveyed through Collier?s lively and imaginative prose, they illuminate shadowy corners of an extraordinary American saga.